It’s a blustery and sunny day. As the protesters snake along the side of a field, Yarl’s Wood comes into view. Yarl’s Wood is tucked away out of sight on the edge of a business park outside Bedford. To one side a motorway, on the other green fields. Two perimeter fences stand between the protest and the detention centre. As we approach the end of the track, the volume of the protest increases (‘Shut it down! Shut it down!’) and we see hands sticking through the windows. The windows must barely open, the hands and arms can only squeeze through up to the elbow. On the right, an orange scarf is waved. In two of the windows I can make out figures of women but either the windows are mirrored or the light is such that the hands are all we can see of most of the people inside. After a while, alongside our own chanting, we can hear noise coming from inside. There is a ‘shushing’ among the crowd and a chant of ‘freedom’ from within becomes audible. 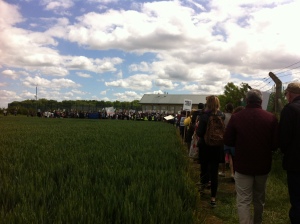 Travelling across London to get to my coach to the demo, I had been reading ‘Death and the Migrant’ by Yasmin Gunaratnam. It is a beautiful and urgent piece of writing about the coming together of migration histories and end of life care in the bodies and experiences of dying migrants. The book reflects on the interactions between people at the end of their lives and those who care for them. In Yasmin’s book there are fumblings, moments where palliative care workers get it wrong, often through being worried about causing offence to someone due to worries about cultural differences. But the book also uncovers moments where new ways to alleviate or grasp suffering come out of interaction and negotiation at the borders of bodies and of life and death.

What kind of exchange is our waving and chanting across the border fences at Yarl’s Wood? What does it do? It is an expression of solidarity and an attempt to bridge a border with bodies, through physical gestures and making noise. It relies on volume because the gap between the groups is so wide. It is a highly-charged affective and emotional event that resonates differently in our bodies, according to what side of the fence we are on and our previous experiences. There are tears at the fence. Some on the demonstration side know what it is like to be kept inside this place. Earlier in the day Lydia Besong, from Women Asylum Seekers Together, spoke about what it meant to revisit Yarl’s Wood where she had previously been detained. She described being able to ‘smell the place in the air ‘. For those of us who have not experienced the horrors of detention, this moment of hearing voices and seeing hands brings for a moment a different kind of connection to the suffering inside.

Carrying out the ‘Mapping Immigration Controversy’ research project has involved examining how the border is brought into everyday spaces, from the hospital waiting room to the street, through anti-immigration campaigns and resonate differently, through bodies in place and time. It has involved sitting down with people who have been scared by these campaigns for a variety of reasons – their experiences of detention or racism, or because their fears of immigration have been exacerbated. Our focus groups were often highly emotional events. They were characterised by powerful stories of fear and anxiety, and by bodies shaking with rage or blinking back tears. The project is now coming to a close and we have the challenge of communicating our findings back in a way that conveys some of this embodied experience of the border in everyday life.

A gust unfixes a placard from its stick and it blows across the cornfield, away from Yarl’s Wood. I recognise it from a workshop carried out with women asylum seekers and the choir I am in. This is another alliance characterised by both fumbling and moments of connection and solidarity. The cardboard sign reads ‘we are all human’. The choir walks back to the bus.