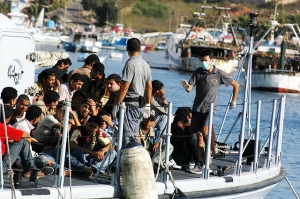 Over the summer, national attention has been drawn to the ‘migrant crisis’ at the border between Britain and France. With at least 3,000 people living in temporary accommodation in Calais while they await a decision on whether they will be allowed to stay in France, many are also trying to cross the channel to the UK – risking their lives as they do so. This has been going on for many months – but came to a head over the summer as disruption was also caused by strikes by transport workers in French ports.

The UK government response has been to identify the people trying to come to Britain as a threat, and to make ever-escalating promises to keep them away. Having already spent £7 million on fences and security on the French side of the border, the Home Secretary is today signing a deal with the French government to invest further in security, including through a jointly run “command-and-control centre” to further “target criminals who smuggle migrants into France”. This follows the Prime Minister’s comments that characterised people crossing the Channel as a “swarm” while expressing “every sympathy with holidaymakers who are finding access to Calais difficult” in response to the death of a man trying to enter the Channel Tunnel. Meanwhile the Labour MP Keith Vaz declared that the French government should “deport [migrants] back to their countries” – despite all the talk of ‘illegal immigration’, it is rarely mentioned that this in itself would contravene international law if the people being deported were in danger in their countries of origin.

Newspaper coverage repeatedly discusses how the “migrant crisis” is of much larger magnitude in other countries of Europe – the German government estimates it will receive 800,000 asylum applications by the end of the year while nearly 50,000 migrants entered Greece by sea in the one month of July 2015, and 90,000 have entered Italy so far in 2015. 2,000 people have already died in the Mediterranean this year trying to enter Europe; 3,279 died in 2014. By contrast, the numbers of people successfully entering Britain through the Channel Tunnel are in the low hundreds. Yet the government’s emphasis remains on the entry of migrants to Britain as a threat which must be tackled with ever tougher measures.

Our research demonstrates that this ever-increasing “toughness” on migration only increases fear and anxiety. This is true for people who think migration is too high; for people who are concerned about the well-being of migrants; and for people who are migrants themselves, or feel that others will see them as such. Yet the tough talk continues, not only at Calais, but also seen over the summer in the government announcement of increased measures to make sure public service workers speak English, alongside drastic cuts to English language teaching which is already unable to cater to the number of people who desperately wish to learn or improve their English. Government policies on being “tough” not only increase anger and fear without reassuring a worried public, but they appear to lead to increased harassment of ethnic minority British citizens and settled migrants, while there is no evidence that such measures actually reduce any of the problems associated with the migration crisis. 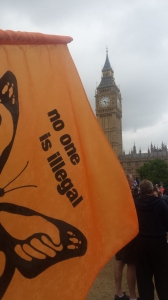 Our research also showed that government campaigns demonstrating “toughness” on immigration have produced new waves of activism to counter them. This can also be seen in reactions to the situation at Calais and across Europe, with increasing number of ordinary people arranging journeys to support people in the camp at Calais, comments by the Bishop of Dover, and calls for support for refugees from senior figures in Britain’s Jewish community.

Our research showed complex attitudes about immigration control across the country, which do not easily map onto the widespread assumption that the majority of British people are hostile to migration as a whole, or to people seeking refuge. We were told by migrants who had come to Britain, that they wanted to come because of the “British values” of democracy, the rule of law, individual liberty and mutual respect and tolerance for those with different faiths and beliefs which this government continues to celebrate. If the government is serious about such values, perhaps it might consider taking the lead of the cyclists taking help to people in need, and the Bishop of Dover’s call to “rediscover what it is to be a human, and that every human being matters.”