This briefing highlights our key findings at the end of the funded research for our project. We have also produced a longer leaflet with more detailed findings for download as a pdf. 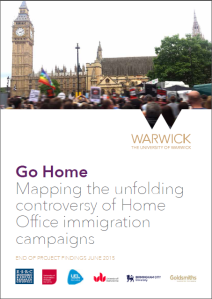 We will continue to develop further detailed writing on the findings in articles for academic journals and for broader audiences, and in a book which we expect to be available in 2016. You can continue to keep up with further outputs from the project on our website and through Twitter.

You may also be interested in a (very) short film about what we have found https://mappingimmigrationcontroversy.com/film/ and a series of videos of sessions at our end of project conference.

Government publicity campaigns that demonstrate ‘toughness’ on immigration cause a significant minority of people to become more worried about irregular migration. This includes people who are scared that they are being targeted – both migrants and British citizens – and people who are worried that migration is ‘out of control’.

Ten key findings from our research