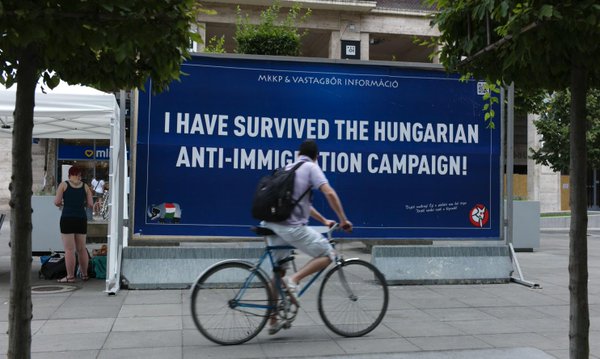 Recently Hungary has been featured more frequently in international news media due to the country’s response to the increasing influx of refugees and migrants. The Hungarian government’s harsh legislation, the razor-wire fence and police violence at the borders as well as the xenophobic billboard campaign as part of the ‘National Consultation on Immigration and Terrorism’ in 2015 have led to many headlines and much critique.

The latest political development in this regard was the October 2, 2016 referendum initiated by Prime Minister Viktor Orbán and his governing right-wing Fidesz party on the mandatory resettlement quota. Although referendums are usually celebrated as the pinnacle of democracy, what makes the Hungarian case controversial was not only the government’s campaign leading up to the referendum but also its reception of the outcome.

A few months prior to the referendum the government started a campaign urging the public to answer ‘no’ to the question: ‘Do you want the European Union to order the mandatory settlement of non-Hungarian citizens to Hungary without the consent of the National Assembly?’. The main rhetoric of the campaign was to ‘Send Brussels a message’, implying the European Commission, whose policymakers proposed the idea of resettling refugees in the member states of the EU along with a financial aid package intended to contribute to the integration of refugees to the given host country. The Hungarian government’s position is clear, it rejects this proposal and is doing everything in its power to gain public support for its views beginning with placing hundreds of billboards across the country with messages such as:

Seeking to maintain public attention, the campaign kept utilising more and harsher statements and as the date of the referendum came closer one could hardly escape this ubiquitous propaganda. It was not only visible in the form of billboards in public spaces, but also as posters on the sides of public transport, as images in newspapers and as adverts in between television and radio broadcasts. The £8.5 million of public money spent on the campaign even allowed the government to send out a letter to each citizen eligible to vote with a specific request: ‘Do not let others decide on your behalf, we ask you to vote no on 2 October!’ as well as an 18 page-long detailed pamphlet highlighting that ‘we have the right to decide who we want to live with’; ‘immigration puts Europe’s future at risk’; ‘illegal migration increases terror threat’ and ‘mandatory resettlement endangers our culture and habits’.

The exaggerated level of fear and threat manifests in a paranoia which is useful for the government to legitimise its restrictive policies and practices. Besides the publicity campaign the recruitment of 3000 ‘border-hunters’ was launched who will join police and army forces in patrolling the borders and keeping out asylum seekers. Claiming to inform Hungarians about these alleged threats, the campaign instead invites terrorism into the discourse, is alarming and provoking while further reinforcing xenophobia, intolerance and hate. Refugees arriving from war-torn countries such as Syria, Iraq and Afghanistan suffer a backlash precisely because they are identified with the threats that they are trying to escape. Without acknowledging their refugee identities, dignity and agency, referring to them as ‘illegal migrants’ and criminalising them as potential terrorists the campaign portrays them as threats to the security, economic welfare and cultural identity of the Hungarian nation and Europe. Let us not forget that refugees crossing Hungary today are walking on the footsteps of nearly 200,000 Hungarian refugees fleeing in 1956.

However, it cannot be assumed that these views are received homogeneously across the public. Despite the strong anti-refugee rhetoric of the government and its supporters, there is a counter-discourse emerging which challenges this hostile position on the grounds of solidarity and human rights. Hungarian NGOs started a counter-campaign urged the public to boycott the referendum by either not attending or casting an invalid vote by ticking both ‘yes’ and ‘no’ on their ballots and thus making the referendum a failure. The ‘Magyar Kétfarkú Kutya Párt’, a fringe political party placed billboards and posters in public spaces with satirical statements such as ‘Did you know that there is a war in Syria?’ ; ‘Did you know that people are not stupid?’ and the opposition also encouraged people to ‘Stay at home, stay in Europe!’ on 2 October.

The majority of Hungarians indeed either stayed away or gave an invalid answer to an unclear, misleading question — the actual EU proposal would mean the resettlement of 1,294 refugees to Hungary and the quota system was suggested in the first place to ease the weight on border states of the EU. As a result, the referendum was invalid given that the number of valid votes did not reach the 50% threshold with only 41.32%. Even though the referendum is not legally binding due to the low turnout, the government and its supporters still celebrated the outcome as a victory based on the 98% of those taking part backing the government’s standpoint, rejecting the EU plans. The government tries to communicate the invalid referendum as a success with some follow-up billboards stating that ‘We have sent a message to Brussels: 98% NO to the mandatory settlement quota’, the production of which cost another £3 million and benefitted the allies of the government, certain media and advertising firms. An extension of the government’s agenda, gaining even more control of the media was the shutting down of ‘Népszabadság’, one of the leading daily newspapers in the country, also known for criticising Orbán and his government as well as the quota referendum.

For some, staying away came with a significant risk given that in certain rural regions, especially those with a Fidesz leadership, the dependence on government support and the fear of austerity pressured people into voting. Although silence is often considered as agreement with a particular political standpoint, it is not necessarily the case. Silence and ignorance can be regarded as resistance too as actively choosing to be ignorant and resisting that way requires a certain level of engagement and is not the same as not caring at all or assuming that one is not affected by political issues entirely.

In a country with an ethnically homogenous population, where phrases such as ‘Roma crime’ have been present in the political vernacular for decades along with systemic racism and the marginalisation of ethnic minorities, coupled with the rise of right-wing radicalism it comes hardly as a surprise that the tactic of the government is to mobilise masses around exclusion. It seems to me that this system thrives on division, its interest is to uphold current inequalities and hierarchies in order to maintain power. This aim is served by keeping the public eye on the refugee and migration issue, steering away attention from other socio-economic problems in the country’s healthcare and education systems among others. It is both controversial and ironic that the government is so vocal about rejecting economic migration while there is an ongoing out-migration from Hungary for economic reasons.

However, a reason for hope is the various modes of resistance, the counter-actions by individuals, communities and organisations withstanding the government’s agenda, refusing to be homogenised as complicit in this process: people boycotting the referendum by not showing up, or casting an invalid vote; people taking to social media posting their invalid ballots with messages on them expressing their disagreement; NGOs working on helping refugees and migrants to integrate, on educating the public and advocating for rights. These show that there are ways of resistance even within this system, that there is political discussion, engagement and action diverging from the campaign’s intentions.

These anti-refugee and anti-migrant sentiments are definitely not confined to Hungary but have parallels across Europe and the USA. Although the inimical position of the Hungarian government and its supporters to refugees have been widely condemned abroad, a conscious resistance from within is the first step towards systemic change which is why it is so important. It must be realised that this fear mongering rhetoric and these hostile attitudes are truly dangerous, they divide and polarise, poking larger and larger holes in the very fabric of social cohesion that will have repercussions for people on both sides of the Hungarian borders.

Linda Nagy graduated from the University of Warwick in 2016 with a BA in Sociology specialising in Cultural Studies.