This week it does feel like things are reaching breaking point. A week before the referendum to decide whether Britain leaves or remains in the European Union, a national political campaign revealed a billboard whose imagery directly mirrored that of Nazi Germany, urging ‘we must take back control of our borders’. That day, an MP who had spent her life fighting with compassion and grit for social justice was assassinated. Witnesses reported that the murderer shouted far-right nationalist slogans of a group to which he apparently had longstanding links, Britain First.

The UK feels like it is splitting in half. This isn’t something that happens in an instant. Fractures creep over time, but eventually they reach breaking point. The campaign for the UK to vote to Leave the European Union has suggested that the country is at ‘breaking point’ because of migration. I would suggest it is at breaking point because it has become an intensely polarised place politically, socially and economically, and unable to discuss the complex – sociological – causes of this.

There is an outpouring of disgust and grief across the country at Jo Cox’s death. There have also been, over the days since, condemnations of the ‘politicisation’ of her death – met with the retort that there is a good deal of evidence that this was a politically motivated attack. Britain First, to which media coverage suggests the suspect was connected, has made official statements and taken actions which appear to meet the legal description of terrorism, and to make it a candidate for proscription by the Home Secretary. In court following his arrest for Cox’s murder, Thomas Mair gave his name as ‘death to traitors, freedom for Britain’ (Britain First slogans) and it was heard that he had told police officers he was a political activist when he was arrested. The UKIP leader Nigel Farage, who launched the ‘Breaking Point’ poster for the EU Leave campaign on the day of Jo Cox’s assassination, and who has previously stated that ‘It’s legitimate to say that if people feel they’ve lost control completely, and we have lost control of our borders completely as members of the EU, and if people feel voting doesn’t change anything, then violence is the next step,’ refused to mourn Jo’s death, and instead claimed, as MPs entered the House of Commons to pay tribute to their murdered colleague, that the Remain campaign was using Cox’s death for their political advantage.

Farage followed this up by stating, ‘The Remain camp are using these awful circumstances to try to say that the motives of one deranged, dangerous individual are similar to half the country, or perhaps more, who believe we should leave the EU’. This ‘one deranged, dangerous individual’ was, it seems, part of an organisation that declares it shares many political goals with Farage’s UK Independence Party. This is not the same as saying that Thomas Mair’s motives in (allegedly) killing Jo Cox were the same as half of the country. What I am saying is that it is very clear this murder was not one isolated, fluke incident, but something for which the ground was prepared by the undermining of social institutions leading to despair and anger, and the determination of political leaders such as Farage to turn this despair and anger on migrants.

In the referendum campaign, making the EU debate centrally about immigration (‘take back control of our borders’, ‘I want my country back’) and blaming ‘the elite’ for siding with the EU has been the secret of Farage and others’ success so far (bearing in mind, of course, that all of the leaders of the Leave campaign are part of the political and economic elite). Being able to simplify arguments to the point where, even when claims are shown to be outright lies, they can still be insisted upon as the truth, and being given the space to do so by claims to ‘balance’ in the media, has undoubtedly helped. When spokespeople for the Leave campaign are challenged on their claims about amounts of money paid into the EU, they admit they have given false information, and in the next breath insist the information is not false. When they are challenged on their claims about what other politicians have said, they simply insist they are right. When they are challenged on claims about migration figures, they assert that it is impossible to keep promises while in the EU, but will magically become possible outside of it (leaving aside, of course, any discussion of the rights and wrongs of ‘controlling migration’ in the first place).

This is symptomatic of a political culture which has dismissed critical thinking, understanding of the complex relations between personal experience, political and social structures and historical processes, in favour of who has the snappiest one-liner and is most willing to insist on their viewpoint in the face of all evidence. There is a reason why Boris Johnson dismissed ‘sociological justifications’ for the London riots of 2011, and why former Prime Minister of Canada Steven Harper refused discussion of the root causes of terrorism by stating it was not the time to ‘commit sociology’ following arrests of suspected terrorists in 2013. It’s because sociological thinking, at its best, makes the links between individual experiences and actions and societal and structural forces. It analyses power relations and questions taken-for-granted assumptions. Sociological thinking would refuse the lack of questioning and engagement that we have seen on both sides of the EU Referendum debate.

Let’s go back to that quote from Boris Johnson referring to ‘sociological justifications’ too. There is nothing that requires sociological thinking to provide justifications for actions or decisions. Moral and ethical questions aren’t solved by thinking about the relationship between personal lives and political structures. But those moral and ethical questions do get more complicated when you think sociologically, and that, presumably, is what Boris doesn’t like.

The Guardian, among others, keeps spouting articles that claim to uncover dissatisfaction among ‘the working class’, and therefore justified direction of anger about this dissatisfaction towards new migrants (and by proxy against the EU, which for the sake of shorthand public debate apparently stands for open borders, despite the EU as a whole seeing countless people die at its borders over decades). These articles are no more nuanced than Farage’s Breaking Point poster, and they lead to similar conclusions, but they are passed around by self-flagellating left-wing middle-class circles as if they make some kind of left-wing case for leaving the EU.

It’s important to listen to people with a different perspective, and to understand where they are coming from. But there’s a difference between understanding why people are doing something, and thinking it’s the right thing to do. There’s a difference between understanding why people are voting Leave, and thinking it’s the right way to vote (and/or that voting Leave would address issues that make people anxious – lack of decent jobs, lack of decent housing, creaking public services). I’m not saying all people who plan to vote leave are racist/fascist/stupid. I’m saying there does seem to be an upsurge of mistrust of people in power, and the Leave campaign and the mainstream press have managed to angle that at the EU, bypassing the super-rich, the current government, and the major newspaper proprietors who support them, and who will continue to ransack the place, in or out.

Let’s be clear: there ought to be potential for a social justice argument for leaving the EU (‘Lexit’). This is that the EU restricts welfare arrangements (as in Greece), fails international humanitarian standards in the treatment of refugees, engages in deals which privilege multinational corporations over social justice and exploits unbalanced trading power with non-EU countries. But Britain does all these things on its own too. There is no reason to believe the UK outside the EU would abandon any of that. But it would abandon labour protection laws including protected maternity rights, environmental standards, anti-discrimination protection, and – importantly – it would signal to many that Britain is an even more ‘hostile environment’ for anyone born overseas (or suspected of being).

To put it more succinctly, the argument most ‘Lexiters’ give is that the EU is a neoliberal project; but the Leave campaign is not giving an alternative to neoliberalism. They also lean on quotes from business leaders and ‘job creators’ (many of whom, like James Dyson, are not particularly patriotic when it comes to the opportunity to ‘create jobs’ with lower wages and worse job conditions than they would get away with in Britain – or the EU).

The kind of articles that claim to ‘burst a middle class bubble’ by voicing an ‘authentic’ working class without putting that in social, political or historical context just feed the neo-fascists. The points about mistrust need to be made but it can’t be left as of the only conclusion is that a vote to Leave (or closing borders more completely) is the answer to those justified grievances. If we Leave, it won’t solve any of the problems expressed in these articles, and then the next place to go in rejecting the status quo with promises of ‘jam tomorrow’ will be outright fascism.

If we want to work together to understand and address the anger and mistrust that is leading many people to vote Leave, those interested in social justice – and who see that the way to achieve this is to recognise the importance and interplay of personal experiences and political issues – need to get better at making nuanced arguments more clearly. We need more sociological imagination – and to act on it – if we are to address the complex causes of the current ‘breaking points’ our society is reaching. 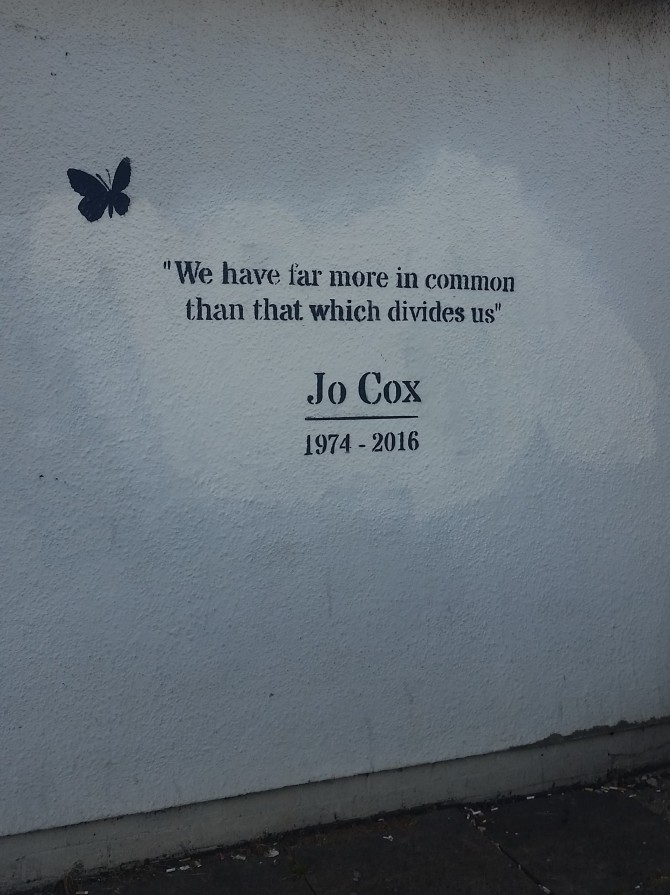