From Cyprus all the way to Belgium, you contacted me to check if I am OK after the Brexit news greeted all of us last Friday. 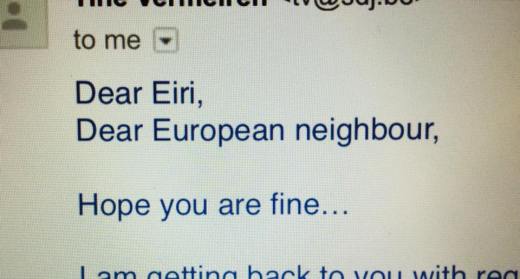 Thank you everyone, and I am sorry I haven’t responded to you yet. I never thought I would come face to face with such a grave catastrophe that is likely to have an irrevocable repercussion for the entire world.

This Referendum meant different things to different people. It was more than just a question of whether the UK should remain a member of the European Union, which, among other things, guarantees freedom of movement within EU.  For some, it was also a question of identity; are we European or not?

On the night of the Referendum, I stayed up watching the news until 3:30am.  Anxiety meant I couldn’t sleep. I wanted to know the result before my partner woke up, so that I knew how to respond to him. His grandmother came to the UK from continental Europe when fascism last engulfed Europe. Being a polyglot in many European languages, he has never doubted his identity as European. Brexit, for him, has been like “being deported to the UK for no reason”.

I write this letter to you Sunday evening, two days after the referendum result has been announced. You all know that David Cameron, Prime Minister, said he would step down in October – but even he had no ideathat this would happen. Everything and everyone is still in a total muddle right now, perhaps apart from Nicola Sturgeon in Scotland. When, how or even whether the UK is actually going to quit European Union is unclear. Even those who were leaving Leave campaign do not seem to have a plan, and I am not joking. I apologise for so many links to different articles – but you get the gist; there is a panic in the UK, with more than 3 million people (as of Sunday 26 June) asking for the second referendum.

Maybe you think this is some sort of British humour.

I wish it was. But this is the reality of a divided nation that has been long time coming.

Remember nearly half (48%) of those who voted said they want the UK to remain as a member of the European Union. Some of my friends told me that they have been crying since the result came out. Others that I met on Friday were like ghosts – they looked pale, they were agitated, angry and didn’t know what to do with themselves. I think I was just stunned and I still am to be honest. How would you feel if your EU citizenship and identity has been annulled overnight?

Many of us have fellow EU citizens as our family members, partners, colleagues, neighbours, doctors, shopkeepers and fellow students. Can you imagine being told that these people, who make up our daily life, who make our life as European truly European, are no longer welcome here?

Apart from the collective confusion, Brexit has also unleashed a particularly virulent form of xenophobia and racism, with a direct impact on migrant communities. You will see some frightening examples here and here and I expect to encounter similar hostilities myself in the near future in the country which is now my home. But please don’t get me wrong.  Xenophobia, racism and anti-immigration feeling have always existed in the UK.  This is not new; I am just saying that Brexit is likely to make it much worse.

People must have voted for Leave for many different reasons and I think/hope not all of them are racists. However, one of the key messages of the Leave campaign was they want their country “back”, back from Brussels, back from the establishment, back from cosmopolitan elites. For some, this meant they want their country “back” from immigrants. The definition of immigrants in this case is very wide though; they could be EU citizens, third country nationals or anyone who looks foreign, including those who are not white, regardless of whether they are British or not. For some people, the outcome of the Referendum means that the entire country now agrees with them, that it is totally acceptable and correct that they should be telling us to pack our bags and go home.  Of course, for many immigrants, the UK is now home.

I am still watching this catastrophe unfold in front of my eyes. It’s like watching a slow disaster movie that somehow never ends. I am sure we will have more to discuss in the future but where does this leave me, at least for the moment?

I want to let you know that Brexit does not alter me. I intend to continue to consider myself European, British, Japanese and a migrant all at the same time, which reflects my journey and the reality of contemporary intersectional identity. I was born and grew up in Japan, spent my late teenage years in Germany and have lived in the UK for 25 years now.  Right now, my job regularly takes me to other European countries. I consider London in the UK, in Europe, to be my home. It could have been easily otherwise; depending on where I settled or moved through I could have thought of myself African, Asian, American.  Humans are incredible; we can carry multiple experiences and their significance in our life to feel we are who we are and we should be proud of our ability to connect with others while recognising our own individual uniqueness.

I am sure some will question my Europeaness and Britishness because I am a migrant, and probably more so when they see the colour of my skin. In defiance of racism and stereotypes, I am happy to continue to insist on my complicated and superficially contradictory identity born out of migration. I will also not apologise for my cosmopolitan identity, just as I will not apologise for my gender, sexuality, class, (a lack of) religious faith or ethnicity. I will not apologise for being who I am and for preferring to coexist with others than to create fences between myself and others.

I know many of you through work; together we’ve been fighting for the rights and dignity of all migrants and all human beings. I will, of course, continue this line of work – well, as a migrant and a human being, it has always been very difficult to draw a line between this work and my own life. I would like to ask you to continue to work with me and give me courage while I do my bit in the UK; I have fewer colleagues here who are prepared to fight for and with all migrants.

Here in the UK, I have not been very successful in convincing my colleagues that talking just about refugees is not helpful, when Europe could be on the brink of the resurgence of fascism. I have not been successful in convincing others that talking just about “deserving” and “hardworking” migrants is indeed toxic and reducing migrants into mere economic, labour units is dehumanising. I have not been successful in letting others understand that it is important for migrants ourselves to speak up and act for ourselves, in solidarity with supportive groups and individuals; being offered endless cups of tea is nice but it’s not going to change the world. I don’t have many colleagues in the UK who understand that migration is a global phenomenon; it does not stop at the border, it connects places and people. This Brexit will make my work in the UK harder, and I need all the help I can get.

Lastly, I feel privileged to have you as my friends, colleagues and neighbours in Europe and I appreciate that you regard me in the same way.  See you soon.