Over the summer, the increasing humanitarian crisis as thousands of people move through Europe seeking sanctuary, safety and safe passage has led to sustained media attention.  The International Organization for Migration (IOM) stated that  350,000 migrants have crossed  the Mediterranean this year (107,500 arriving in July alone), in search of sanctuary and safety in Europe, landing on the shores of Greece, Italy, Spain and Malta and then many moving on to other European countries.  In the UK the most recent figures have revealed that net migration to the UK reached 330,000 in the year to March making it a record high – though only a small proportion of this number were seeking asylum (25,771 applications in the year ending 2015 – not all of which will be granted) with the majority made up of EU migrants, and international students. The IOM  recorded 1,819 deaths en route to Italy in the first half of 2015. The recent image of a toddler found face down on a beach not far from the Turkish tourist resort of Bodrum immediately trended on twitter under the hashtag #KiyiyaVuranInsanlik (humanity washed ashore). The little boy’s name is Aylan, who drowned along with his five-year-old brother Galip and their mother, Rihan. Their father, Abdullah Kurdi, survived. 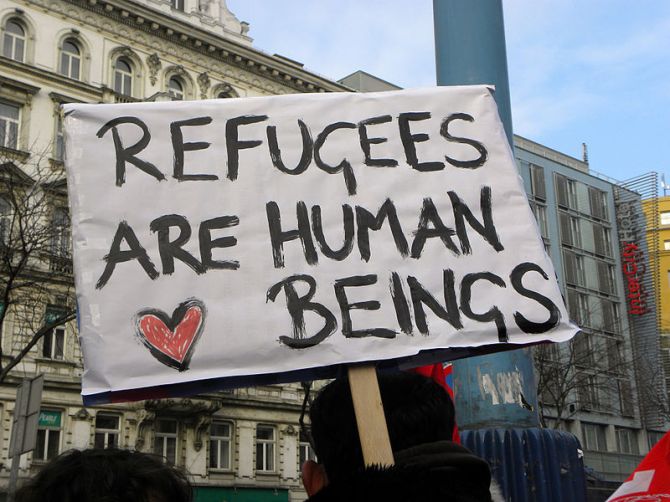 Photography by Haeferl, shared under a Creative Commons Licence https://commons.wikimedia.org/wiki/File:2013-02-16_-_Wien_-_Demo_Gleiche_Rechte_f%C3%BCr_alle_(Refugee-Solidarit%C3%A4tsdemo)_-_Refugees_are_human_beings.jpg

As a humanitarian crisis, increasing calls are being made by countries such as Germany, Italy and France for “fair distribution” of refugees throughout the EU. With this has come calls for the creation of a European refugee agency and increased focus on the proposed rights-based European agenda on migration that seeks to address root causes behind irregular migration, save lives, strengthening common asylum policy and re-visioning the role migration play in light of the demographic challenges facing many EU countries. Jean Asselborn who holds the  EU presidency said in a recent report that all EU countries should have the capacity to absorb refugees, and moreover that “(T)he EU’s values must be valid through the union. No-one can say we don’t want Muslims or blacks,” he told German daily Sueddeutsche Zeitung referring to comments made Hungarian Prime Minister Viktor Orbán who stated last week that refugees threatened to undermine the continent’s “Christian roots”.

Hungary is one of the main migrant entry points to the European Union, receiving more than 156,000 this year alone. A razor wire, 13 feet tall  border fence along 175 km of the southern border with Serbia has been erected, and this week authorities shut down Budapest’s main train station, effectively stopping hundreds trying heading for  Austria and Germany.  They are not alone in taking a tough stance. Fences have been erected in areas of Spain and also at Calais with the support of the UK Government. With this has come calls from nationalist movements across Europe not to support the crisis, the proposed mandatory quotas, and a hardening attitude towards immigration, often linked to the religion and culture of those fleeing their countries of origin.  In this humanity is lost. Perhaps that is why Czech police authorities  chose to  identify 200 refugees by writing identification numbers on their arms.

The UK Government’s response has been in keeping with their long-standing need to project a tough stance again immigration. The Prime Minister’s  recent defence of using the word ‘swarm’ to describe people crossing the Mediterranean and his  insistence that “We need to… break the link between getting on a boat in the Mediterranean and getting the right to settle in Europe” underpins the standing Home Office policy to be seen to be tough on immigration, to do as the Home Secretary Theresa May has been for years: create a hostile environment for irregular migrants through the introduction of new laws and anti-migration campaigns. ‘Go Home’: Mapping Immigration Controversy (MIC), a recently completed ESRC funded study exploring the impact of Home Office campaigns that I was involved in found no evidence that UK  government communications about immigration and enforcement are based on research about ‘what works’ in managing immigration. The only research evidence policy makers mentioned to us was privately commissioned research on managing public opinion about immigration, particularly among those worried that immigration is ‘out of control’. Policy makers told us that their research and advice indicate demonstrating toughness is the way to reassure public worries about immigration and that both government and campaigners deliberately avoided quoting social and economic research within public debates on immigration. Government campaigns on immigration provoked or increased anger and fear, among irregular migrants, regular migrants, and non-migrants, including people opposed to immigration. The latter told us they that the government campaigns were ineffective ‘theatre’. The finding that hard-hitting government publicity on immigration seemed to provoke new waves of pro-migrant activism seems to be borne out in more recent campaigning against the seeming reticence of the UK Government to respond to the humanitarian crisis.  In the study we found that anger and outrage was translated into online and street-based activism, including of people who had not been engaged in activism before.

The position pushed by the UK Government works on many levels. It divorces the current crisis from the part the West has played in the global wars and instability that is driving people to take such risks and it works to subsume the international conventions governing those fleeing prosecution by labelling them all ‘illegal migrants’. The lengths people are going to secure safety and sanctuary are in this context deemed  ‘irresponsible’ rather than desperate.  In Wales, Monmouth Conservative MP David Davies seems to be echoing such sentiments stating in his recent debate with Anna Nicholl, chair of the Welsh Refugee Council that people are  “risking their lives to come here because they see something at the other end.” Acknowledging the restrictions placed on Wales in this matter, First Minister  Carwyn Jones this week said that Wales is ready to play in this humanitarian crisis,  stating that the Tory Government  “urgently need to rediscover some backbone and their moral compass”.  Giving his support to Shadow Home Secretary Yvette Cooper’s call to accept 10,000 refugees would indeed be a good start. What is also needed is a close look at the refugees already living in Wales and what could be done to better support them.

In our research we heard that many people had come to the UK because of ideals often promoted as ‘British values’ – such as democracy, the rule of law, individual liberty and mutual respect and tolerance for those with different faiths and beliefs. Their experience since arrival called into doubt the existence of these values in Britain. This was the case for those living in England as well as those living in Cardiff. The position of the UK Government is of their making and one they seem unable to put aside in the face of a growing alarm by the British public who increasingly see the crisis as a humanitarian one where the response should and must be to help. Wales has always prided itself on doing things differently.  Wales doesn’t need to wait to help those seeking sanctuary and safety; there are those already here in need of the Government’s support and perhaps now is the time to not only ‘stand ready’ but also to review the situation of those already here.