As the Labour Party’s Pink Bus gets on its merry way, there is growing speculation about how women will vote at the General Election and what we know about their main concerns. A poll conducted by TNS BMRB for BBC Radio 4 Woman’s Hour found that immigration was number 4 in the top 5 concerns for the women that were polled (it was number 3 of the top five concerns for men). A little more insight is provided by extracts from a focus group session they conducted with six women from Bexley Heath in south east London. One gets the sense that they view immigration as a problem but, other than a passing reference to border controls and the impact of global elites on London’s house prices, there is little detail about what specifically or how immigration concerns them. In fact some of the interviewees in our research suggested that references to immigration are more of a proxy for other grievances, particularly concerns about the economy, access to housing and welfare support. And our own surveys have found, it’s difficult to capture, statistically, the multiple things that are meant when people say they are concerned about immigration.

Moreover, renewed debates about intersectionality should act as a timely reminder that women do not speak with one voice and that the increasing hardline on immigration could be understood differently by women depending on the way that they experience multiple axes of power at any one time. It could be the case that the women that most acutely feel the impact of the Home Office’s immigration campaigns are from ethnic minorities and particularly (but not only) those subject to immigration controls. It is not clear how many of the Bexley Heath focus group participants were from minority communities but we worked closely with our west London community partners, Southall Black Sisters, to facilitate two focus groups with a total of 15 women of Asian, African, and Caribbean descent. The two groups comprised a mix of British nationals, those that have been resident in Britain for a considerable period of time, those that recently gained leave to remain in the UK, and also a number of women that are awaiting news of applications or appeals. Their comments offer new insights into the ways in which women might be concerned about immigration and also how this may feature for women as an electoral issue. 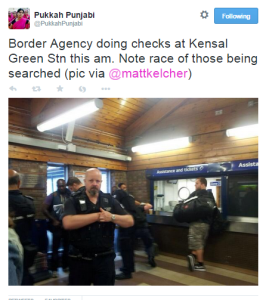 The west London focus group participants were shown a set of four images, each depicting a different Home Office immigration campaign or recent tactic. For each image, we asked them to discuss the following:

The discussions were emotional; they talked openly about the visceral experience of immigration in their lives and the lives of people they know. There was an overwhelming sense of fear and stress. Even those that had gained leave to remain in the UK expressed anxiety about being stopped at transport hubs. One such woman panicked when she saw UK border agency officers and dogs at the exit barriers of a London train station. She became so nervous that she turned away from the exit barriers and jumped on a train. In this panic, she boarded the wrong train and when she eventually reached home she stayed indoors for some time because of a fear that her leave to remain might be revoked.

Furthermore, this restriction on movement could impact on women’s ability to access the places of support that they need to deal with their circumstances and effectively respond to the immigration system such as getting to women’s organisations, support groups that are vital for their ability to stay strong during these stressful periods, and lawyers that could help ensure that they have access to the right information. For a subsection of the population where mental health, suicide and self-harm have been reported as disproportionately high, it’s alarming to hear how women’s mental health is being impacted by these campaigns. In fact two women provided examples of migrants that had committed suicide.

Many of the women at the Ealing/Hounslow focus groups were concerned about the way that Home Office tactics are stigmatising immigration claimants as criminals and dehumanising them. One woman likened immigration raids in the UK to the stealth tactics of armed robbers in Nigeria, while another woman said that it reminded her of the way that stray dogs are entrapped and captured in India. Connected to this were concerns that local people are informing on each other and that suspicion within communities has grown.

News coverage of immigration enforcement raids in Southall, used in our focus group

A number of women talked about feeling ‘provoked’, ‘harassed’, ‘threatened’ and targeted. They felt angered by what they saw as a threat to the personal security, stability, and freedom of movement of their friends and others within their minority communities. And racism and racial profiling featured as a strong aspect of their concerns, of the sense that their communities, their particular friends and families are being targeted.

In most part it was felt that the Home Office immigration campaigns don’t reveal or enable a proper discussion of the real life stories behind the images. For a state that frequently claims to be the harbinger of rights (particularly of women’s and children’s rights), equalities and freedoms, far too little is being said about the struggles of those that are impacted by these publicity campaigns.

The women that participated in Radio Four’s poll and focus group seemed to display a great deal of cynicism about elections and politicians. Our findings from the Ealing/Hounslow focus groups indicate something similar but for very different reasons. The BME women from Ealing/Hounslow were cynical about the use of immigration as a way to please a particular section of the electorate. If their view of the use of immigration in the run up to the May 2014 elections is anything to go by, politicians would do well to bear in mind that for some people these immigration campaigns are doing more to reinforce the view that their ethnic minority vote is less important to politicians than the white majority vote.

2 thoughts on “What do women think? A view from Ealing/Hounslow”