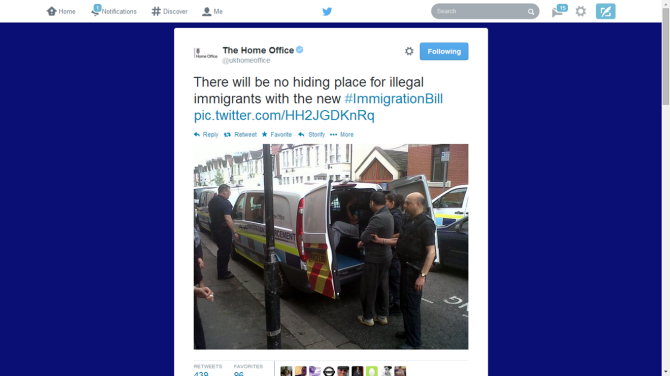 Tuesday 29th April. It’s around 2pm in swanky SW1. In a Middle Eastern restaurant the air is thick with spices, convivial chatter and the clinking of plates and cutlery. Two gleaming white vans park in a nearby lane. Ten men and women of varied ethnicities and age make their way to the restaurant, equipped with a strange assortment of mundane and exotic paraphernalia. Smart phones. Clipboards. Black biros. Walkie-talkies. Mobile fingerprint scanners.

Over their short-sleeved navy-blue shirts they are wearing padded bulletproof vests.

This is an immigration raid.

Some customers leave the restaurant. The Immigration Enforcement officers go about their business. “When did you get your British passport?” a young woman officer with a vibrant pink wristwatch asks a restaurant worker, as two of her colleagues gather around her, encircling a small table.

All the paperwork seems to be in order this time. No one from the restaurant is detained.

This is my first close-up view of an immigration raid. It’s a surreal experience, simultaneously menacing and business like.

I was nowhere near the restaurant on Tuesday but I was able to see and hear some of what happened because allies of the Anti-Raids Network intervened in the raid and posted a short film of the events on YouTube. As well as informing the restaurant staff about their right not to answer questions or to show their passports, the vocal protesters followed the Immigration Enforcement officers back to their vans, chanting ‘Racist scum off our streets’. They continued filming while one of the officers filmed them on his mobile phone, walking backwards at times and panning the camera from side- to-side to ensure full coverage of the protestors.

The Anti-Raids Network is one of an increasing number of pro-immigrant activist groups that have developed in Europe and across the globe over the past ten years. The Network is a coalition of London based groups. According to its website, the Network

‘…believes in free movement, and does not differentiate according to nationality, race, or immigration status. We therefore aim to make people aware of their rights in the context of an immigration check, and to support those who are being questioned, raided or arrested by the authorities purely because of the colour of their skin.’

The methods and tactics used by the Network and similar protest groups are varied. Its activities include workshops and ‘bust cards’ that inform people of their rights during an immigration raid. Their use of photographs, film and social media is something more recent, mimicking and subverting the strategies used by UK immigration enforcement that last year included tweeting images of those detained as part of last year’s high profile publicity campaign. One image tweeted from the UK Home Office was of a man being led into the back of a van where another detainee was already seated. The photograph was accompanied by the message “There will be no hiding place for illegal immigrants with the new #ImmigrationBill”

In a recent editorial, for a special issue of the journal Citizenship Studies on immigrant protest, Imogen Tyler and Katarzyna Marciniak suggest that:

‘New media, such as the Internet, 3G mobile video phones, weblogs, social media, and instant messaging, have inordinately strengthened migrant politics. These technologies are employed to co-ordinate the swarming of bodies on the streets, to capture and upload videos of protests and police violence, and to generate publicity for struggles. The advent of these digital communication systems means that protests staged in one physical place are now transmitted across borders so that even smaller scale protests, such as riots, fires, and hunger strikes by immigration detainees, and individual anti-deportation campaigns have the potential to resonate internationally.’ (p.143-44)

The audio-visual recording and archiving of immigration raids by protesters in the UK marks a new visual economy and aesthetics of global immigration politics that is producing rather than simply preserving history. For years immigration raids have been brought into the public eye through stories based upon competing and fallible memories. Many have been forgotten or lie hidden in the folds of bureaucratic files or feelings of shame. These newer practices may hold greater potential for eliciting transnational connections and coverage but they are by no means free of their own challenging questions and paradoxes. Does the reassurance of a virtual online archive help us to forget rather than remember? Or more prosaically, what is the layered geo-social politics and potential that inheres in the calling of immigration officers of colour ‘racist scum’?

There is another important facet of the interventions that these online activist archives make that is more challenging to name and to research. This stems from the ways in which audio-visual media create and evoke something of the sensory drama of the reconfiguring of our ordinary spaces during immigration raids. They gesture towards what the anthropologist Kathleen Stewart sees as the emotional ephemera of ‘atmospheres’ that can open up new ‘small worlds’ (p.511).

Later the restaurant returns to some appearance of normality. The kitchen will resume its temporal rhythms. Customers will dither over which delicacies to choose from the menu. Friends and families will exchange intimacies. Few, if any, will have a sense of what happened earlier. For those of us who witnessed the raid and who might see similar events caught on camera in the future, I wonder how the experience of eating out might change. If only fleetingly.