I knew my quest to take part in the march in Cardiff had taken a decidedly bleak turn when I found myself looking around for a police officer to ask for information. Having started off very early – too early, in fact – in order to get to the park in time to lock my bike, mill around and ask if any help was needed, I had decided to go for a coffee in the new cafe nearby. Refreshed, I set off again to the park, only to discover that the address I had scribbled on a scrap of paper was not right. The next hour saw me cycling the length and breadth of Cardiff, from Bute Castle (city centre) to the Synedd (Cardiff Bay) via Grange Park and Lloyd George Avenue, and then back down Bute Street into town – and finally to the blocked-off area of the municipal district.

The cycling around gave me time to think and reflect. How was it possible not to be able to find 500 souls marching in the city centre? Aside from the busy weekend shoppers, there was a large Nescafé pop-up shop giving out free coffee, street performers were keeping the crowd’s attention, and the supporters of the two premiership football teams were flashing their colours. Town was busy and people were bustling around; the very many worlds people inhabit were suddenly very apparent, as were the competing interests and priorities that people are faced with on a daily and hourly basis.

But wait! This was my first protest march. My protest had always been via community-focused research rooted in the priorities of grass-roots organisations, but never community activism. I could have been lining up for free coffee rather than cycling frantically looking for 500 people marching through the high street. What is it that makes people march or not? As deeply interested as I have been in all manner of struggles, why was this the first time I had attended a march in the UK? Would I have attended had it not been for the work I was doing on “Go Home”: Mapping the unfolding controversy of Home Office immigration campaigns, an 18 month research project that explores the impacts on local communities and national debate of current publicity campaigns about migration by the UK Home Office? What drives activism? That was when the quiet unease set in.

Keenly aware of the rise of the Right, the impending European elections, and the increasing negative anti-immigration discourse dominating both UK and European politics, the Wales branch of United Against Fascism (UAF) had used the slogan ‘DONT LET RACISTS DIVIDE US’ in their leaflet about this demonstration. This was not a stand-alone demonstration: similar ones were taking place in London and Glasgow. Organised to coincidewith UN Anti-Racism Day, they were part of an international day of action, with demonstrations taking place across the globe – from New York to Athens to Sao Paulo. According to reports, there were 7,000 or more on the London demonstration, with 1,000 in Glasgow and 500 in Cardiff.

I got to the demonstration just in time to see the end of the march and the start of the speeches. I heard someone mention the fact that the size of the demonstration had dwindled noticeably, although there were still quite a few people who had stayed for the speeches. When I asked people in the crowd why they were there, the most common answer was to be part of ‘something bigger’ with reference to the other demonstrations taking place; also, many thought it was important to ‘make a stand’ or ‘do something’. Others spoke about the event taking place later in the evening, set to bring people together through music – the Hip Hop Over Borders club night. It seemed that this was to be a release of sorts – a way for people to protest but also a time to re-group and enjoy themselves.

The atmosphere during the speeches was subdued but attentive. They were held in a small area of the municipal district – close to Cardiff Town Hall and just down from the Welsh Assembly Goverment’s main building in Cardiff. We were also a few hundred yards from the Central Police Station, although there were no uniformed police officers in attendance. Many well-known campaigners, as well as a few new Assembly Members and activists, were on the list of speakers.

The speeches drew on several themes. One was the pride people felt about the groups and organisations that were demonstrating. Trade-union banners flew alongside banners representing the views of Plaid Cymru, migrant workers’ groups, anti-racist and anti-fascist campaigners, as well as those of Muslim, Christian and other faith communities – including the Muslim Council of Wales, No Borders South Wales, the Anti-Bedroom Tax & Benefit Justice Federation, Unite Against Fascism (UAF) and  the Socialist Party – as well as Assembly Members, community leaders, and individuals who were keen to show support. It was not just the coming together of a range of political and social interests that was being celebrated. This diverse grouping seemed to suggest a sense of unity among different population groups, with the Chair of the Muslim Council of Wales stating that ‘we are working together to make Wales a multicultural and multi-faith nation – we are all Welsh and are proud to be Welsh’. 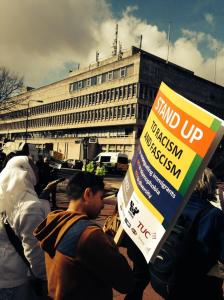 Added to this was a strong call for caution and consternation against the rise of anti-immigration and racist discourse emanating from Westminster. Alun Michael, a Wales Police Commissioner and long-standing Labour Assembly Member, talked about the fact that many people are ‘proud to be Welsh and Somali, Welsh and Pakistani, to be Welsh and West Indian’ and the need to continue to hold this pride close and to ensure that the ‘narrow nationalism, extremism and racism’ gathering strength in Europe does not ‘reinfect’ the people of Wales. He ended by saying that this was an opportunity to celebrate the positive stance held in Wales with regard to ‘unity and internationalism’.

Several other speakers developed the theme that the policies and rhetoric emanating from Whitehall need to be quarantined and contained, and that there are clear distinctions between the ways in which immigration is being articulated in Wales and in England,  with a need to cut off at the border the ‘Tory’ approach to immigration. Within this context, activities such as the ‘Go Home’ campaign are very much rooted in the approach being taken in England. Many of the speakers considered Wales a much more tolerant nation – a place where multiculturalism and diversity are sources of pride and not problems; where the positive impact of immigration on society is welcomed and not denied; and where the fight against anti-immigration, racism and fascism is to be addressed not only within the context of other places in the UK – England in particular – but also within the wider context of Europe and the resurgence of a narrow, damaging notion of nationhood and belonging.

Cecilia Love, a recently elected Labour Councillor recounted the fact that we need to fight for those who cannot fight for themselves, that communities are feeling like they are being ‘attacked’, stressing again the importance of working in partnership to address these issues. Another speaker made links with Martin Luther King’s ‘I have a dream’ speech and the need to continue to fight the ‘good fight’. Jill Evans, Assembly Member of Plaid Cymru, discussed the political climate creating fear and hatred and, moreover, the fact that much of the anti-immigration discourse is not based on fact. She drew on a recent briefing paper produced by her party detailing its stance on immigration, on the need for Wales to play a greater role in determining its own immigration policies, and on the party’s wish to make Wales a nation of sanctuary.

The speeches lasted 30–40 minutes, with the winds picking up and rain eventually coming when the last speaker rose to address the crowd. With the question on what drives activism still unanswered, I left the demonstration with another question: in terms of immigration, is Wales so very different from other parts of the UK?

In Roiyah’s next post she explores this question – stay tuned!

One thought on “‘Proud to be Welsh and Somali, Welsh and Pakistani, Welsh and West Indian’: observations from the Stand up to Racism and Fascism demonstration in Cardiff (22 March 2014), part 1”